Another super risque bikini from DoA. This time from the Extreme Volleyball games. 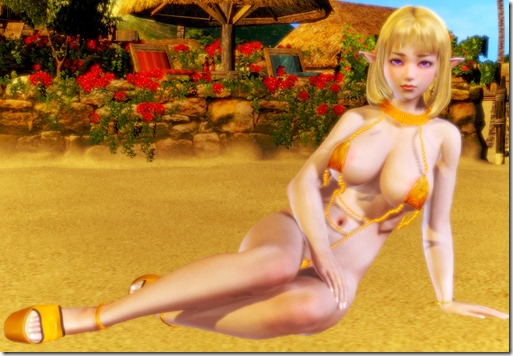 At first this was a test to see how high I could go with the polycount in this game, but I decided to make it better and weighted it so that the beads don’t deform horribly.

Warning:
This bikini is really high poly (over 40k faces), because the beads on the body are actual “solid” models, not a flat model with an alpha texture like the original was.
What this means is that it might slow down your game if your computer can’t handle it.
The neck part is still a flat model with an alpha texture though, because I wasn’t willing to fix weighting for that many beads individually (again) and that would have increased the polycount even higher.
Install:
Drag and drop the contents of the 7z onto your SBPR’s root folder. Replace when asked (have in mind it uses the list “CharaCustomList_AM”, so if you already have a mod that uses this list name, you can rename it).
Uninstall:
Remove the following files:
.abdataListCharaCustomCharaCustomList_AM.unity 3d
.abdataChararoy12_sw04.unity3d