With permission from its author, lwlin, I’ve uploaded MoreSlotID into my server and a mirror, so that it’s easier to download for people outside of china.

I’m also going to put documentation here to know how to use it.

WHAT IS IT FOR

Lots of mods, particularly from China, use it. This is to avoid conflicts more than anything, and secondly so that we don’t have to use Illusion’s slots at all.

WHAT DO I CARE IF I’M NOT A MODDER

Well, if you want to use mods which use IDs with 9 digits, you need this. Most modders using it will tell you that the mod uses it.

Without MoreSlotID, if you install one of these mods, the 9 digits will trim at the center. For example, if you have a mod which uses ID 209999211, but you don’t have MoreSlotID, the game will read it incorrectly as 209211, which will cause a conflcit with whatever else you had in 209211.

An example is Jessica Rabbit conflicting with Samus. Samus head for example is 200972042, where Jessica is 200042. If you don’t have MoreSlotID and install Samus while having Jessica, the game will read both IDs as 200042, which will cause a conflict, and you’ll have issues.

TL;DR: Get it or you’ll have issues with mods using it.

DOES IT WORK WITH THE VR EXECUTABLE?

Yes it does. Read the install/update instructions.

Get it from here or here.

Before anything, make a backup of your *_Data folders in case anything goes wrong (it shouldn’t). Also make sure to always have a clean backup of these, as it comes handy when you have to solve some issue.

A. Extract the file MoreSlotID.exe to your HoneySelect root directory (where the main game’s executable is located):

B. Execute MoreSlotID.exe by double clicking on it: 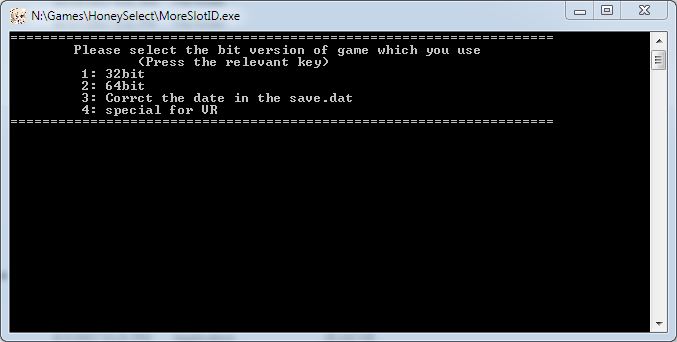 IF YOU ARE UPDATING FROM MORESLOTID 1.0: Press 3, wait for it to finish, and it’s done. No need to do so otherwise. Third step is only to fix an issue when updating from 1.0.

IF YOU USE THE VR EXECUTABLE OF HONEYSELECT: Press 4 too to patch this executable’s binaries, it will give you MoreSlotID support in VR too (already confirmed to work!).

No screen for this as my game is patched, but it should say Finished. If it says “Patched”, that means that you already had patched with MoreSlotID 1.3. Please note that it can update from both 1.1 and 1.2.

NOTE FOR PEOPLE STUCK IN HONEYSELECT 1.10 FOR SOME REASON: It will tell you to please check the existence of StudioNEO’s dll. To ignore the message just press enter and continue with the instructions.

C. Done, close the prompt once it’s finished and MoreSlotID is now installed/updated. Now you can install mods using it and they won’t conflict with regular IDs.

In case you have an issue like it’s not working for some voodoo possession in your PC, try restoring a clean backup of your *_Data\Managed\Assembly-CSharp.dll file, then following the previous steps again.

Well, if you believe you’ve found an actual bug and you’re pretty sure about it, post it here. Make sure to include good documentation (i.e. pictures) for bug reporting, else it’s very hard to understand what’s going on.

THE PATCHER CRASHES WHEN I RUN IT

You’re running the patcher from a directory that isn’t the HS install directory.