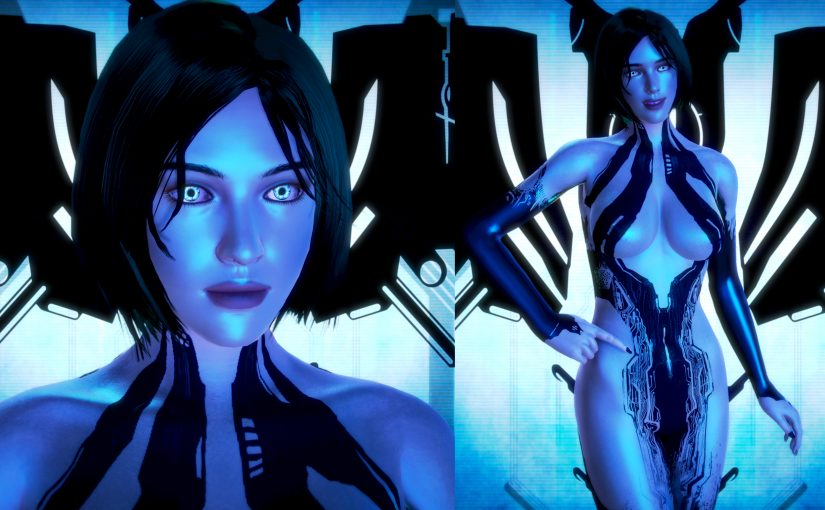 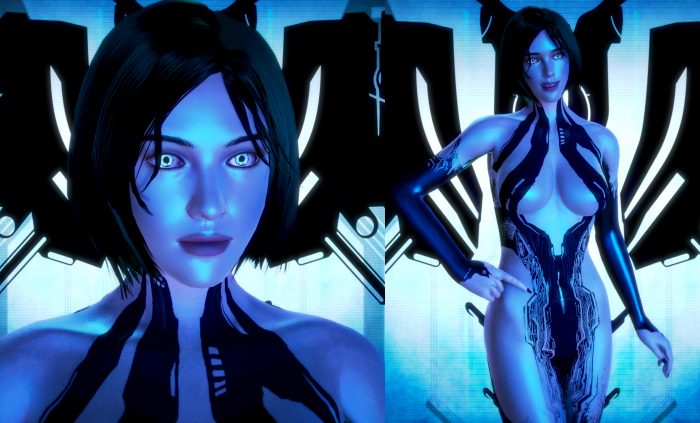 If you want to skip my blogging, you can do so, nothing about installing will be covered in these paragraphs.

So this was one of this month’s requests. This wasn’t as hard as it was time consuming. But that’s because I screwed up before and used the wrong model (it was improvised or something, but the face shape was completely different to Cortana’s and you could tell it was tampered with). After I had completely imported the wrong model, with fixed weights for morph building and all, I find a port of the original model for SFM by CaptainFreeman. Fug.

So I had to start from the beginning, this time with a good model though. But then it only has shape keys for creating expressions, and everything was merged in a single mesh divided by materials. Luckily, you can combine both shape keys and skeletal animations in MDD files, so I made a skeleton for her cheeks and the tongue, made the expressions, combining skeletal animations with shape keys for a few frames, fixed the UV (this one’s better too), worked the textures, exported to mdd, imported the mdd to a copy of the whole head, then separated the head by materials.

After a bit of Blender being more like Bender (it does that sometimes),  I finally got her imported again, this time with the good model.

Anyways, she has two head types, one has her original teeth, which have a small gap at the upper incisors, and another one with that gap fixed. Up to you which one to use.

I also made a “body suit” (in pantyhose slot) of sorts to give her the body markings. SkinTexMod wasn’t behaving as I wanted it to with the specular map, so I had to do that. It clips with tops and bras. Oh well. I added a sun tan that you can use with other stuff, but it’s less detailed, obviously has no specular and the resolution is lower.

Finally, I tried to make the teeth and tongue get colored with the skin color. But it’s not possible unless you join them to the head’s mesh. Not gonna do that. So I made them blue with the material’s RGB. If you want to change that, you must open her head files and modify the teeth/tongue material’s RGB values.